from Orange Music, Volumes I & II by LILLI LEWIS @folkrockdiva 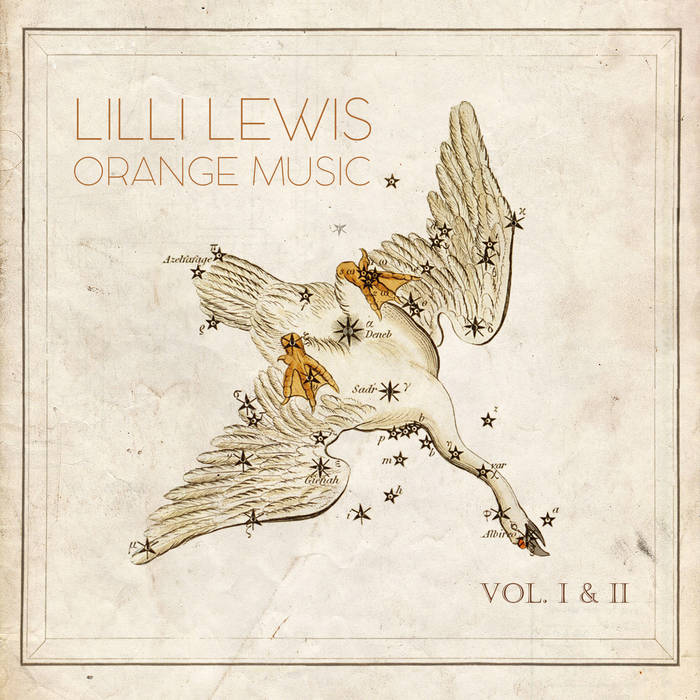 Trying to release this song was deeply and surprisingly confronting. I thought it was gonna kill me. I'd written the bulk of the story years ago. Jenny was a real person (though that wasn't her real name) and I told it almost exactly as it happened (there really was a giant painting of Bob Marley and Tupac Shakur riding stallions into sunset or sunrise or something like that). At the time,the song had been called 'The Point," and the chorus was "the point is we're all dying here, don't forget to live before you go."

It only changed in the last verse, when I say "she'd always been a quiet bird." That wasn't her, that was me. Jenny was a vibrant, charismatic, gorgeous, talented and confronting firecracker who struggled with bi-polar disorder. The quiet bird was me, "the kind you never thought to ever think about..." I was the one who, as a middle child with a history of sexual and physical abuse, had made it my specialty to disappear. I was the most invisible motherfucker I knew, and that was part of the problem with trying to sing this song. I didn't wanna come out as having the same problems that Jenny had...at least when it came to suicide.

Jenny had tried at least twice, and had landed in the hospital both times because people actually noticed. That wasn't true for me. I had spent my entire life wanting to die without anyone ever noticing. I didn't even find out until a few months before I released the "Anatomy" EP that I should have been in the hospital too. I never knew my problems or my pain warranted such attention. I had learned a couple of years earlier that I wasn't ever going to take my own life, and because I no longer had that escape route, I had chosen to seek trauma therapy instead.

That was a ridiculous and unfortunate ride, but along the way and thanks to my beloved Paul, I had developed a vocabulary for the things that had happened to me that made me think suicide was ever an option, and, thanks in part to two relapses in 2016, I even forged a path to understanding in my marrow why suicide would never be an option again.

Also along the way, this song re-emerged during a time when I was feeling desperate to tell my story but was choking on my words, even in therapy. Late one night, in the middle trying to write to Paul about this very thing, the song slipped into my awareness. I looked up the lyric that was almost a decade old by then, and slinked on over to the piano. My hands fell on to the chords as if we'd always known how the song was supposed to go. The colors of the chords kind of reminded me of a little Joaquin Nin-Culmell piece I had been taken with in my younger years, and I "found myself" in the sound.

The melody then fell out just as simply, but the chorus no longer seemed to belong. The sentiment was the same, but the voice was different. Earlier, the chorus was spoken from the voice of one who knew there was a point to living. Now that the song was sitting closer to my bones, I had to admit that wasn't my voice. I could only bring myself to admit that I know this whole life thing only has one ending for all of us...the how may be different but the what is the same...and knowing that, admitting that, the question for each of us is to determine not what we're doing with our lives, but what are we doing in light of our mortality. The chorus that emerged also put the choice back in the hands of the subject. We are, after all, all dying here.

I sent the lyric and demo to Paul as quickly as it fell out, and his favorite part was the same as mine...the wordless vocalise at the end that offers no answers but simply stands as a wispy little witness to the moment. I was so happy that she song had finally been born after so many years, that I didn't even process that whenever I would try to sing this song, I'd be revealing something that I'd worked really hard for a long time to hide. I don't know why I have been so ashamed that this has been a life struggle for me, and I think I secretly hoped singing this song would bring some healing to me. It's ironic that my band has never been able to pull off the live version of this song. I have a theory that even in it's more rhythmic interpretation, it's just too intimate and vulnerable for our collective neurals.....Wow, that sound pretentious! Feh....maybe one day we'll get it.....

YEAH, IT’S BEEN POINTED OUT TO ME
MORE THAN A FEW TIMES
THAT THERE’S NOT A SINGLE ONE OF US
GETTING OUT OF THIS ALIVE

from Orange Music, Volumes I & II, released January 15, 2017
Recorded by TJ Barends at Baresounds in Ponchatoula, LA and by FRD for Sanctuary Studios in New Orleans, LA